If we take the stand that paying for a service gets you a vote and rebalance the votes to suit that notion, we come to a very interesting point of view.

Every now and then, I watch Joey Coleman's ThePublicRecord.ca live feed of Hamilton's City Council and I'm reminded of a scene from Wingfield's Progress:

Township Clerk: Your Worship, the first item of business is a letter from Demeter Township saying they don't want to contribute to the Larkspur Library Agreement anymore.

Reeve: What are they whining about now?

Township Clerk: Seems they've checked the records, found that no one from Demeter has used the Library in the past two years. They say it ain't worth it and they want out.

Councillor: Ain't had no fire up there this year either. They ain't askin' to get out of the Fire Agreement.

Township Clerk: Is it the wish of council that I write them back while they can still read and tell them to go to hell?

Last week, Hamilton City Council played its role with Academy Award precision to the standard set by (the fictional) Persephone Township Council. The latest embarrassment to the citizens of Hamilton: the parochial and naive vote to dismantle the King Street Bus Lane.

However, I think we've missed something very significant in the "Shaming of the Nine" tweets and articles. Something that Councillor Merulla brought up but did not chase to the logical extent necessary to drive the point home. Quite simply: "Money Talks".

One of the many quirks of post-amalgamation Hamilton is the notion of Area Rating. Put simply, different parts of the city contribute more or less of their taxation percentage to various civic services depending on the level of service they receive.

I'll even go so far as to say it makes a certain amount of sense. Most of Flamborough lacks sidewalks and streetlights; therefore, they shouldn't have to pay as much for those services as someone in Ancaster, where sidewalks through downtown are wide and well lit.

Where this plan falls apart is in the idea that different parts of the city contribute to the operation of HSR at different levels depending on notions around how much service they receive.

This topic has been discussed many times on Raise the Hammer with a couple of stand out articles:

From 2007, Time to End Area Rating for Transit:

The current area rating system charges the average ($179,000) home in old Hamilton $165 a year in HSR levy. This is almost exactly five times the levy imposed on the same value home in Ancaster ($34). The numbers for Dundas are $41, for Stoney Creek $53, and for the tiny part of Glanbrook that pays transit levies, it's $70 per average value household. Flamborough (including Waterdown) pays no HSR levy at all - and has no HSR service.

From 2011, Area Rating Presents Opportunity For Leadership And Consensus-Building:

And more recently on the excellent CATCH - Citizens At City Hall:

The average-valued home in old Hamilton is taxed $288 a year to support the HSR, while a similar-priced house in Ancaster pays just $71. The equivalent charge in Stoney Creek is $83, in Dundas $62, in Waterdown $50 and in Mt Hope $93 per annum.

You can see how this system is laid out geographically using the City of Hamilton's Transit/Sidewalk and Streetlight Service Area map: 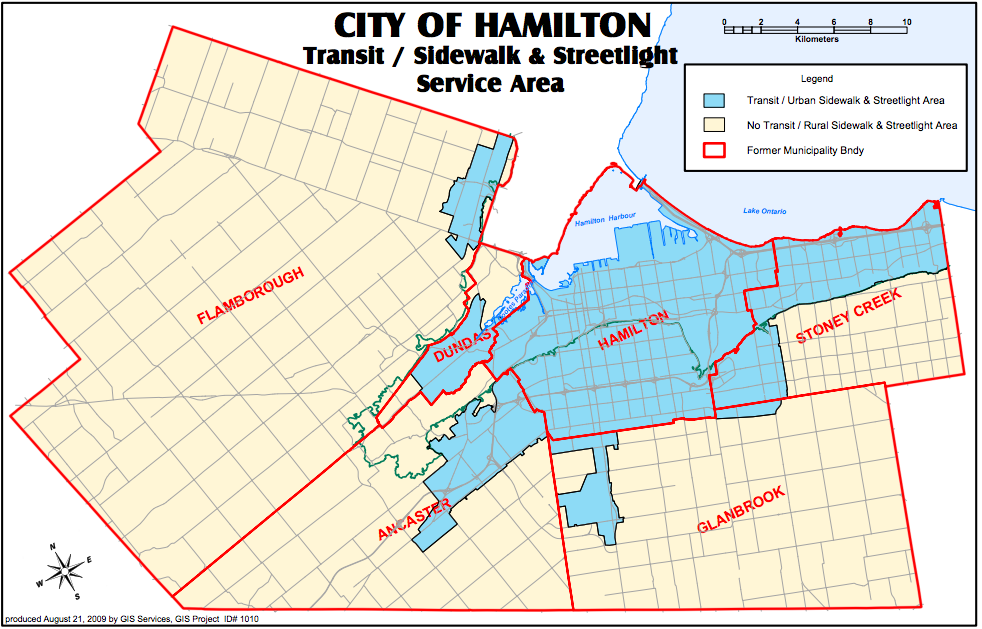 Although, you'll also need a Ward Map to keep it straight in your head: 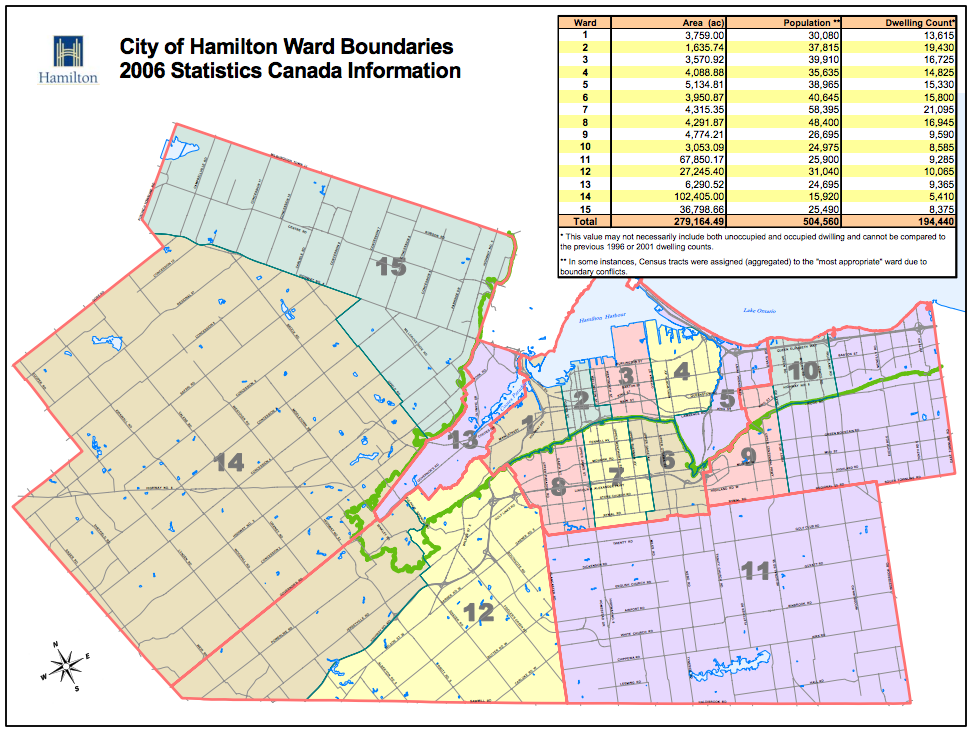 As you can see, the blue area representing the Transit / Urban serviced area is a relatively small proportion of the overall size of the City (wow, Hamilton is HUGE!) but the population of the blue area is also the majority of the citizens of Hamilton.

If you try and learn about Area Rating from the City website, the best you'll manage is some stale data from 2011 on a page titled "City of Hamilton - Corporate Services Area Rating".

Dig a little harder and you can find the "City of Hamilton - Residential General and Area Specific Rates By Community" [PDF] document from 2014:

As you can see, the contribution rates are in the column "Area Rates Applied to Respective Community" and include the variation for Urban (comes with Transit) and Rural (No Transit).

Hamilton pays more than twice the rate of the next closest (Glanbrook) and more than five times as much as the lowest (Flamborough).

If we even out the percentages to make them a little more comprehensible, we have the following:

That's right: for every $1 in property tax paid by a West Mountain resident in Ward 8 towards the HSR, an Ancaster resident in Ward 12 pays just $0.28. I'll let that sink in for a moment and don't forget that Ancaster Councillor Lloyd Ferguson owns four taxi cab plates while you're thinking about it.

The Areas are related to the pre-amalgamation municipal boundaries and therefore we have to puzzle out how much coverage each Ward has relative to the Service Area as well as the original municipality boundary (ie: Ward 11 - Glanbook covers an area of what was the Municipality of Stoney Creek).

Without better access to GIS data of population distribution and something other than Mark 1 Eyeball to figure out areas, I've assigned the following 'serviced areas':

If we take the stand that paying for a service gets you a vote and rebalance the votes to suit that notion, we come to a very interesting point of view.

With the exception of Brenda Johnson in Ward 11, who voted for the transit-only lane, there are four councillors who voted against a Transit issue who have very little skin in the game.

If you use the area rates and percentage serviced numbers from above, you can calculate a "Weighted Vote Value":

Despite the lack of a promised citizen engagement on LRT/Transit, we'll let Mayor Fred keep his vote.

The original vote to keep the bus lane was: 7 for and 9 against.

Now, this is a strongly simplified argument. Improvements in transit are a great example of city building where rising water lifts all boats. Then again, the arguments against the bus lane were simplified too.

Below, you'll find the table with actual numbers. I'll leave it to others to think about how Area Rating continues to hurt the City of Hamilton at the expense of political grandstanding.

As for me - the bio says it all: Infosec geek, hacker, social activist, author, speaker, and parent. I'm going to keep working for a Hamilton that is ambitious and really is "The Best Place in Canada to Raise a Child".

Anyone else want to get ready for the next challenge and the next opportunity?

James Arlen, CISA, is a senior consultant at Leviathan Security Group providing security consulting services to the utility and financial verticals. He has been involved with implementing a practical level of information security in Fortune 500, TSE 100, and major public-sector corporations for 18+ years. James is also a contributing analyst with Securosis and has a recurring column on Liquidmatrix Security Digest. Best described as: "Infosec geek, hacker, social activist, author, speaker, and parent." His areas of interest include organizational change, social engineering, blinky lights and shiny things. http://jamesarlen.net/ Note: his RTH username is "Myrcurial"

Great analysis and explanation of area ratings. I'm familiar with this sort fiscal configuration and knew it applied to Hamilton, but have never seen it explained so clearly.

Useful info next time transit is discussed at council.

Now if we could get an analysis that breaks down assessment per ward, especially total, per acre, and the ratio of non-residential to residential, then we'd really be getting somewhere in terms of having a grown up conversation at city hall.

Very interesting analysis. It would also be interesting to overlay average assessment data. While houses of "similar" value in different wards pay relatively different amounts for transit, the average assessment values in the wards vary widely. So in absolute terms, many tax payers in the 'burbs (hello Dundas!) pay quite a lot of "absolute" money for 50% coverage by HSR.

You need to consider assessment per acre (or some equivalent). Our houses and lots are not equal. I live on a row of 7 houses that all are on roughly 24' by 105' lots. I believe a more common frontage in suburban Hamilton typically 50' and up.

That makes direct comparisons between the two less than straightforward. Two of our "inner city" houses may occupy the same frontage as the average suburban house. Of course, in my area frontages range from 15' to 35' (maybe 40', but these are rare). In suburban areas the frontages can be quite a bit larger too, while in some older areas may be somewhat below 50'.

You also have to consider uptake of services ... it depends on how many people live in each dwelling and how much demand they put on services/infrastructure (particularly schools and roads).

Furthermore you need to consider non-residential assessment, which are generally significant net contributors (pay more than what they cost).

In short, it would be interesting to see assessment breakdowns by Ward. I think people would be surprised by the results.

I agree it would be interesting, but that drives right down into the 'economic status = right to preferential treatment' -- I think as a city, it is incumbent upon us to treat all issues as a "one resident = one right" -- that I live in Ward 4 (and used to live in Ward 3) and choose to live in a house with a lower assessed value than the average in Dundas, does that increase or reduce my right to representation?

Also, in absolute terms, I doubt that the increased average assessment in Dundas is four times that of the average assessment of Wards 1-9. Remember, area rating is a twin-bladed sword - If a Dundas person pays $1 in HSR Area Rated Property Tax, as a Ward 4 resident, I've paid $4.17.

Looks like the average price here is a little less than half that of Dundas - 48.5%

Logically, this means that the Dundas average homeowner pays (in absolute dollars) about twice what I do.

And that also means that for every $1 I contribute to the HSR, the Dundas resident - taking into account the higher assessment - pays $0.48.

So in absolute terms, they don't pay more than I do, not even close. But they do pay for about as much service as they get...

But, if you run the numbers for Wards 1-9 to get the average home price for people who pay 100% of the HSR tax assessment?

As I said in my post, Area Rating really changes how we should view some of these decisions.

Well, I would stack up the assessed value of my home in Durand with any other part of the city.

When my children were in high school I had the pleasure of paying the highest transit taxes in the city and then got to purchase bus passes so that my kids could get to school.

Compare that to the suburbs:

I will never understand how Flamborough/Ancaster got to be three wards instead of two. How is "one man, one vote" not good enough?


No it isn't. Hamilton, and it's kidnapped 'burbs is huge. They don't want to be there. LRT and AREA RATING and DECREPID downtown…..GET OUT NOW!