Ward 2 Councillor Jason Farr confirmed in an email to RTH this morning that most of the parking spots will be retained.

The two-way conversion of Rebecca Street will no longer result in the loss of 13 parking spots. 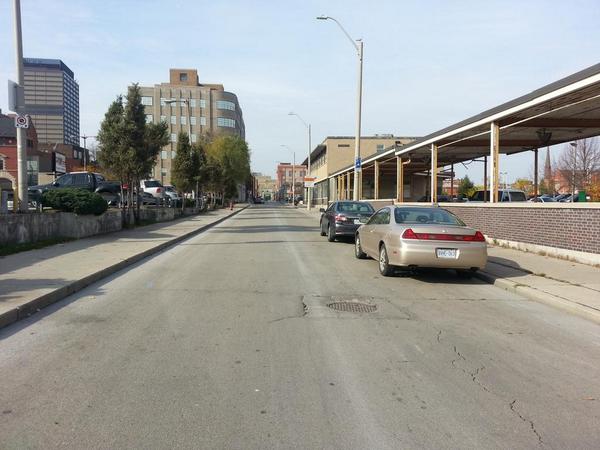 Rebecca Street between Catharine and John

On October 31, the City announced that it will convert Rebecca to two-way between Wellington and John. The plan included removing 11 curbside parking spots in the block between Catharine and John.

Last week, we argued that this is a bad idea. Curbside parking protects the sidewalk, and narrower lanes are safer than wider lanes because they discourage dangerous speeding.

Ward 2 Councillor Jason Farr confirmed in an email to RTH this morning that most of the parking spots will be retained:

Please be advised (and feel free to share) that as it relates to the Rebecca Street conversion, we will be maintaining the parking metres between Catharine and John. With the exception of a few in the middle to create a gap and allow for east west passing‎. Though in most cases, east west passing should not be an issue.

I went out today and measured the width of Rebecca at various points between James and Catherine. Granted that my measurements are somewhat approximate, the street is around 24-26 feet in width both east and west of John (it widens to around 30 feet closer to Wellington).

24 feet is plenty wide for two-way traffic and curbside parking - wide enough for two vehicles to pass each other next to a parked vehicle. It just means drivers have to slow down a bit when passing each other, which on a downtown side street is an advantage, not a drawback.

On the other hand, 12 feet is far too wide for a vehicle lane on an urban side street. That's the standard lane width on the U.S. Interstate Highway system.

Other cities are busy installing alternating "chicanes" - midblock bumpouts - on their side streets to slow traffic by forcing drivers to "slalom" and wait for each other to pass. 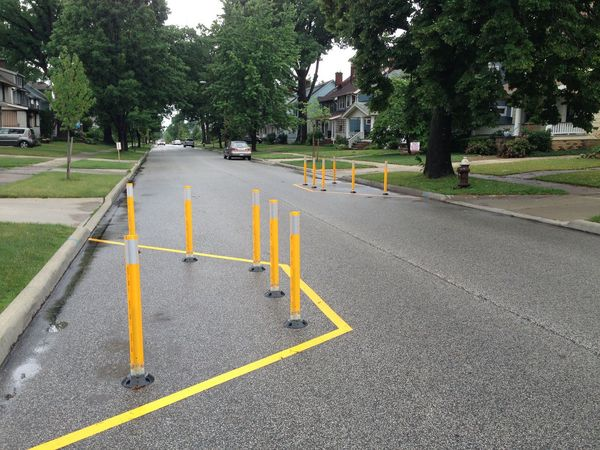 We have to get in the habit of regarding street features that slow traffic as a good thing rather than a problem to be eliminated.

It's nice to see the City changing its position on removing curbside parking. It would be even nicer to see the two-way conversion extended all the way to James instead of stopping arbitrarily at John.

Rebecca's utility to drivers and cyclists is drastically undermined by leaving the last two blocks one-way.

The only place Rebecca narrows appreciably from 24 feet is right at James, thanks to a curb bumpout on the northeast corner. However, the bumpout merely extends as far as the curbside parking would extend. Rebecca is still wide enough for two lanes - one to turn left on James and one to turn left or right on James.

Given the low volumes of automobile traffic on Rebecca, it is unlikely to cause significant problems by making Rebecca two-way all the way to James. Drivers can slow down, negotiate and share the space, as they do successfully on streets across the city. 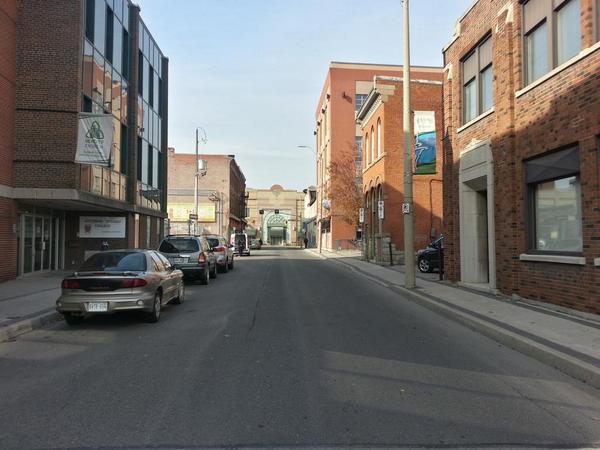 Since Rebecca does not continue west of James (the exterior wall of the City Centre faces Rebecca), there should not be much involved in the signalized intersection.

The reason for stopping the two-way reversion at John is almost certainly the same as the (abandoned) reason for removing the parking spaces between John and Catharine: slavish devotion to suburban design principles that consider the street to be too narrow for two-way traffic and curbside parking. For whatever reason, the initial decision was to sacrifice parking east of John and two-way traffic to the west.

Of course, just as the roadway between John and Catharine can in reality accommodate low-speed two-way traffic and parking, so too can the roadway west of John.

The utility of this conversion will also be hamstrung by the absence of a traffic light at John, but that's a fight for another day.

Can we PLEASE fire the people who keep botching up any and every piece of urban infrastructure they are tasked with? This is embarrassing.

am i missing some thing parking lots on either side of this stretch of the street and now the politically correct demand on street parking as well .... on street parking is Inherently dangerous for cyclists (unless drivers are trained in the dutch method and open doors with the opposite hand)

keep going now you have cancelled bike lanes AND made rebecca street less safe for cyclists.

Progress may not be perfect! But come on because the city doesn't move in lock step with your concept of perfection, is that a reason to hold back progress ?

Cyclists are allowed to take the lane on a road like Rebecca --- they don't have to move over to allow cars to pass them in the same lane, as there really isn't enough room to do so safely, door zone or not. I don't see why they would have to ride in the door zone.

so let's see if I understand. You're criticizing citizens for wanting parking to remain on quiet, slow-speed Rebecca street which will help keep traffic speeds low as they should be on that street, which also helps cyclists safey ride in mixed traffic. Your complaint is that 'dooring' may now become a problem on Rebecca.

Also, you're criticizing citizens for halting bike lane projects on Herkimer/Charlton, two high speed, busy streets - because the bike lane was planned to be wedged perfectly into the dooring zone and next to live traffic.

Hmmm, I'm no scientist but it would appear as though the better street to have cyclists and cars mixing would be Rebecca, especially with curb parking retained, which results in much slower driving speeds. And the one-way streets with more volume and speed, one would think cycling would be safer next to the sidewalk, protected from live traffic and dooring.

But you want the opposite....in the name of looking out for cyclists??

By the way, there was never any proposal for bike lanes on Rebecca, as far as I am aware.

Those lots are always full. What makes them unnecessary?

To the extent that they are sometimes full, it is a predictable consequence of the low price that the city charges for off-street parking. And they're not always full

That picture was posted on November 22, 2013. A Saturday, at 9:04 in the morning. Of course it's not full, the vast majority of the businesses in the area haven't opened for the day; and even then it's not a weekday which is when these lots are typically full.

Go run to that same parking lot now and tell me it isn't full.

Yeah, you're right, that was a Saturday. Here's today at mid-morning

mid-morning is just after 7am? SMH...

My mistake: they aren't always full, but they are full weekdays during business hours.

These pics are from 10:20 today. Your statement is empirically false

The photo I linked above was taken on a weekday during business hours.

What!? No they're not, that's a lot of claptrap

hey, thanks for the heads up on the dutch method of car door opening. thats a great idea that should be shared more widely. i'm going to try to practice that from now on.

(p.s. the rest of your comment completely misses the point of including the street parking which was elucidated quite clearly in the article. and no, obviously, if you had read the article, they have not "(held) back progress."

To get an idea of just how much of a parking glut Hamilton has, you can use parkopedia to compare daily and monthly with other Canadian cities:

Will there also be sufficient space to safely walk a Unicorn?

After all this is Hamilton, the unique city of harbour and escarpment.

No, it simply demonstrates that that was the first opportunity I had to walk past that lot after the publication of Ryan's article. In any case, suppose that the lot is usually full on business days. Congratulations, you've just proved that there is demand for artificially cheap parking. What a great way to build a downtown.

Oh, wait. In that case I was referring to the Saturday photo; you're right. I usually don't take these photos on weekends because somehow a parking lot that is used 40 hours per week is seen by many people to be an acceptable downtown land use, and when I looked up that old photo I forgot that it was from a Saturday. In any case, my other photos from today are obviously from business hours on a weekday. Doesn't really affect my point.

Yes it is a bank holiday but only federal employees are off today, not municipal.